On the Order of the Synoptic Gospels: A Catholic Perspective. 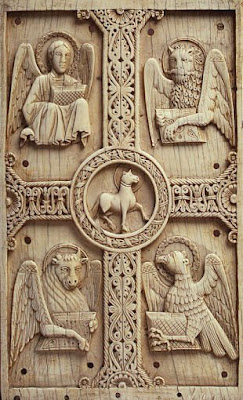 For those unaware, there has been a raging debate in critical New Testament scholarship concerning the order of composition between the synoptic gospels1. This will be a brief introduction to the issues involved, followed by a cautious conclusion on the matter.


The strongest response to Markan priority theories has come from William Farmer who has instead presented the compositional order of Matthew, Luke, Mark (this view has been labled the "two gospel hypothesis" or "the Griesbach hypothesis" after J. J. Griesbach, German scholar of the late 18th century)4.


Both sides of the issue have an abundance of secondary literature and thus a plethora of arguments some stronger than others. Here I will only concentrate on what I consider the main arguments (I refer the reader to any of the works below for in depth analysis of all the arguments - especially Stein's (Studying the Synoptics) ).


1. The argument from language. This is a very strong point that is not easily refuted. Both St. Matthew and St. Luke have a tendency to cooperate in smoothing out St. Mark's rough grammar. It is very difficult to explain why Mark would obscure the clear and understandable passages if he had Matthew and Luke to work with. And much more likely that just the reverse is true, Matthew and Luke sought to explain the hard grammar and syntax of the earlier Mark. One example, in Mark 7:31 we read, "And again, Jesus left the regions of Tyre and went through Sidon to the Sea of Galilee through the middle of the regions of the Decapolis." This is a very strange route which should have Jesus simply heading southeast towards his destination, instead he starts by going north then he ends up in a region of cities even further southeast than his final destination? St. Matthew clears up the difficulty, "And departing from there (the regions of Tyre and Sidon), Jesus came to the Sea of Galilee." (Matt 15:29). Dozens of examples such as these can be cited.


2. Ommissions/changes. Another strong telling phenomena. Again, both Mattew and Luke equally omit or clarify potentially misleading details in Mark. As to why Mark would introduce otherwise misleading details that seem to contradict Matthew and Luke has not been properly explained by Matthean priority proponents. One example, in Mark 6:5-6 we read that Jesus was amazed at the unbelief of the Nazareth crowds in consequence he was "unable to do any miracles there." St. Matthew perhaps aware of the apparent scandal this text has caused in the early Christian communities clears things up, instead Jesus could not do many not any miracles there (Matt 13:58). Other problems that have been noted, why has Mark decided to omit such critical information as the infancy narratives, the sermon on the mount, etc if he wrote subsequent to Matthew and Luke? Many more examples can be cited.


3. The short/long pericope argument. St. Mark is the shortest of the gospels. Thus, we would completely expect him (if he was written last) to follow through consistently in his individual pericope's to abridge. Yet, his individual pericopes are usually longer than that of Matthew or Luke (showing then literary independence).


4. Reason of compositional argument. Assuming Mark was written last (or even second) what then is his reason for composition if he already had fuller compositions done before him?


5. The general arrangement argument. Generally speaking the flow of events in the synoptics tend to follow Mark's order. However, where Matthew and Luke do differ from one another they tend still to follow Mark not eachother, exactly what we would expect if Mark was used by both.

6. The text-criticial argument. Matthew Williams has championed this argument and has demonstrated in painful detail based on textual variants that Mark's readings are usually closest to the original readings as opposed to Matthew and Luke (cf. his Two Gospels from One: A Comprehensive Text-Critical Analysis of the Synoptic Gospels, Kregel, 2006).

2. Matthean distinctions. There are examples of unique Semitisms and other signs of primitive tradition in St. Matthew that are not found in Mark (such as the additional info found in Matt 16:13-20).

3. The Patristic support. The Catholic Fathers expressly support Matthean priority as the first of the gospels to be written according to tradition. However more needs to be said about the citation of the Fathers on this point which is unfortunately misrepresented at times. Papias (as recorded by Eusebius Eccl. Hist. 3, 39, 16,) is sometimes marshalled for support but his statement about the ta logia of which Matthew arranged is hotly disputed and even Farmer doubts the gospel of Matthew is even meant by Papias. Moreover Papias says nothing about the chronological order of the gospels. St. Clement of Alexandria is more to the point, stating that Matthew came first followed by Luke then Mark (as recorded by Eusebius Eccl. Hist. 6, 14, 5-6). Yet later tradition Origen (Comm. Jo. 6, 32), Eusebius (Eccl. Hist. 3, 24, 5-18), St. Jerome (Vir. ill. 3) hold pace Clement and modern Griesbachians that it was Matthew, Mark and lastly Luke (St. Augustine and the Muratorian list have also been cited as supporting this position).

In conclusion, on the one hand it is manifest that the sum total of these arguments for Markan priority is indeed impressive. Moreover, the problems and challenges (theological and literary) that arise if one denies Markan priority are extremely serious. In the effort to silence some who have conjectured that Markan priority are simply liberal or Protestant pet theories we have the monumental Markan priority defenses by the acclaimed Catholic scholar Joseph Fitzmyer5. On the other hand, as a Catholic the consensus of the Fathers on Matthean priority is very important and not easily overturned. It must be admitted that other solutions that do not post St. Matthew as first among the gospels are modern developments with no real attestation in Church history. Thus, a clear cut concrete decision at this point in the state of the issue seems rash. Perhaps a clear path out of this tangled question is the on going research that is being made on the impact and importance of the oral tradition that is used by the evangelists6.
_____________________________

1. The term synoptic is derived from the Greek "syn" (togather) and "opsis" (seeing) thus the idea of "common view," and highlights the similarities between the first three gospels, namely St. Matthew, St. Mark and St. Luke as opposed to the striking different tone of St. John's gospel.


3. Q is the hypothetical source that some scholars posit that Matthew and Luke used as an additional source for information. It comes from the German "Quelle" or "source." Streeter's definition of the issues was even more complex. He argued that Matthew and Luke actually had four sources at their disposal, Mark, Q, L and M (L being the additional source predating Luke and M for the Matthean additional source), thus the "four source hypothesis," cf. B. H. Streeter (The Four Gospels: A Study of Origins), Macmillam, 1924. For a compendium of modern research on the issue of Q see pro; J. S Kloppenborg (Excavating Q: The History and Sayings of the Source Gospel) Fortress Press, 2000; and contra; M. Goodacre (The Case Against Q: Studies in Markan Priority and the Synoptic Problem) Trinity Press, 2002.


4. (The Synoptic Problem), Macmillan, 1964; (Synopticon, The Verbal Agreement between the Greek Texts of Matthew, Mark and Luke Contextually Exhibited), Cambridge University Press, 1969; (New Synoptic Studies: The Cambridge Gospel Conference And Beyond), Mercer University Press, Fall, 1983; (Mark as Composer) Mercer University Press, 1987; (The Gospel of Jesus: The Pastoral Relevance of the Synoptic Problem) Westminster/John Knox Press, 1994; (Arguments from Order in Synoptic Source Criticism) 1994.
Farmer's criticism has attracted a wide following (especially in America) and other scholars have springboarded off of his work; A. J. McNicol, D. L. Dungan, D. B Peabody (Beyond the Q Impasse: Luke's Use of Matthew), Trinity, 1996.


5. Just to name but one Catholic scholar. Fitzmyer in my opinion is perhaps the most erudite and prodigious New Testament scholar of the second half of the 20th century. On Markan priority see, "The Priority of Mark and the 'Q' source in Luke" in (Jesus and Man's Hope), Pittsburg, 1970.

6. Such as the excellent works of among others; B. Reicke (The Roots of the Synoptic Gospels) Fortress, 1986; Terence Mournet, (Oral Tradition and Literary Dependence: Variability and Stability in the Synoptic Tradition and Q) Mohr Siebeck, 2005.
Posted by R. E. Aguirre. at 1:11 PM

Labels: On the Synoptic Problem

I think this article on Matthean priority answers the question well. If Mark was a compilation of short-hand notes based on a Petrine homily on Matthew reconciled with Luke, it answers all or most of the Markan priority arguments you listed.

I answered the problem of geographical errors in Mark here (let's call them what they are, they're not fuzzy grammar it's an error if it's not true - yet Matthean priority allows both Matthew and Mark to be error-free).

I answered several of Raymond Brown's arguments on the subject here which include some of the objections raised under #2 above.

My general essay on Mark's date I wrote a couple years ago here and I also wrote a summary on the dating of the four gospels last year.

All that said, I know Pope Benedict is a Markan priority believer.. This is just one of the few areas I disagree with him on :).

1. The first article you posted by the "churchinhistory" website (which seems to have influenced you tremendously) is a decent presentation and response to Markan priority but I remain completely unconvinced on Matthean priority when it comes to literary grounds. On literary grounds alone Markan priority makes much more sense of the data. What Matthean priority does have strongly on their side is Church history but even then it is not the common posistion held by most modern Griesbachians. Any of the Markan works I cite answer "churchinhistory's" main points plus allow for additional arguments (such as from textual-variants).

2. Your second article contra the Jesus seminarians is an interesting attack on Protestant liberals but does not deal with the arguments as presented by the conservative presentations on this subject, who do not argue that St. Mark is in error and Matthew then tried to "fix" the problem. To force that conclusion is a false dilema.

3. Your diatribe contra Brown really doesn't answer his points in my opinion. Now I agree that arguing on the slippery slopes of supposed theological differences can be simply answered by the fact that the evangelists had different reasons for compositions.

4. Yout article on the dating of St. Mark holds promise but can be seriously challenged on almost every point. But...in this article you claim Markan priority? So have you changed your position, I'm confused?

Pope Benedict is a Markan man for a reason, he can analyze the data and make sober conclusions.

The thesis that Mark wrote based on hand notes from St. Peter is an incredible solution that basis everything on an argument from silence. However that doesn't make it untrue - just it will be very hard to prove. Similar attempts have not been convincing and have not found any backing.

All this said, I remain agnostic on the question after about 20 years on reading the major works on both sides of the issue. What I do know is that those who argue vehemently on this difficult problem are the voices that are usually the less convincing and unaware of the nuances invloved.

This blog is dedicated to the Regulae Fidei, the "Rule of Faith," or the historical Patristic interpretive tradition which together with Scripture, are the joint sources of faith and morals - for the Church Catholic.
The team of contributors is listed above and are from diverse theological viewpoints. This blog is not just about Christian Theology but we comment on all things that can be an interest to intelligent readers.
__________________